acdha
reply
This is pretty close to home for the percentage of intelligent design creationists who have engineering or programming backgrounds
Washington, DC

stefanetal
Also, very compressed code for what it does. Less than 1 GB for a human.

To: anyone who thinks just knowing the source code of something solves problems.
İstanbul

BIOLOGY IS NOT JUST SCIENCE FOR DUMMIES.

davidar
And philosophy is the application of biological brains, hence completing the circle of life. I mean no offence to our forthcoming AI overlords.

There’s more than one reason why iOS 8’s growth has stalled by Andrew Cunningham
Thursday October 16th, 2014 at 2:37 PM 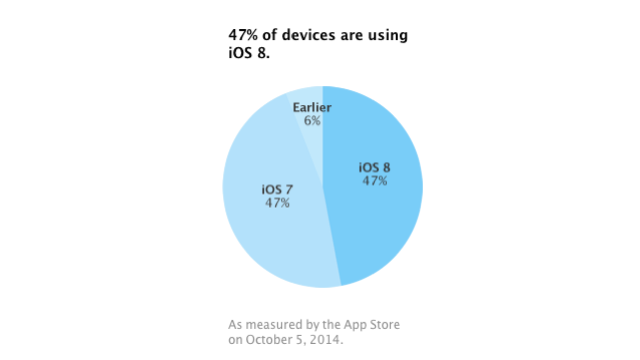 If you follow Apple news closely, at some point in the last week you've probably seen the graph above. It's from Apple's Developer Support page, and the company calculates the figure by looking at the iOS versions of devices accessing the App Store. Like Google's analogous developer dashboard for Android, it's meant to give developers a broad look at OS usage so they can use that data to determine which OSes to support with their apps.

The problem with the graph above isn't that it shows iOS 8 and iOS 7 with the same amount of share, but that the number for iOS 8 has climbed just a single percentage point since the last measurement was taken on September 21. Apple's data mirrors what a number of other independent firms have been claiming virtually since launch day—Chitika's data shows that iOS 8 had rolled out to 7.3 percent of the iOS userbase after 24 hours of availability, while iOS 7 had already hit 18.2 percent in the first 24 hours after its launch. More recent data from Fiksu shows an adoption curve closer to iOS 5 (the last version you needed iTunes to upgrade to) than to iOS 6 or iOS 7.

Fiksu's data shows iOS 8 with 40 percent of the iOS pie after 22 days, compared to nearly 60 percent for iOS 7 and iOS 6.
Fiksu

JEFFnSoCal
reply
Probably doesn't help that when I upgraded my iPhone 5 to iOS 8, it completely wiped my phone and I had to reinstall all my apps and redo all my settings. It was especially painful to get all my token authenticators to reset (bank, online accounts, etc).
Sylmar, California

No wait, Gruber said it was space and 16GB models so all your stats are lies trying to bring down the house of Apple!

That said both my kids decided not to upgrade straight away after all the dot release for 7. Bug fix after bug fix. When it settles it will be worth the upgrade
very large rock orbiting a sun

[deleted]
I still maintain another reason is it doesn't look any different, so most Apple users literally don't see a reason to bother.

lywyn
More recently I've been made aware that 4S model is is showing speed issues on the new update and a do see a lot of them around still.

No doubt I’m not the first of your readers to bring your attention to this story, but just in case: Democratic candidate for Texas governor Wendy Davis has revealed that she had two abortions for medical reasons. I thought you all might be interested because of your previous coverage of late-term abortion.

[Davis's new book] reveals that Davis terminated a pregnancy in 1997 during the second trimester due to the fetus having an acute brain abnormality after Davis received multiple medical opinions suggesting that the baby would not survive. Davis describes in heart-wrenching detail how the experience crushed her. “I couldn’t breathe. I literally couldn’t catch my breath,” Davis wrote of her reaction when she first learned the diagnosis. “I don’t remember much else about that day other than calling [husband] Jeff, trying to contain my hysterical crying. The rest of it is a shocked, haze-filled blur.”

The doctor said that the baby wouldn’t survive to full term, and if she did, she would suffer and probably not survive delivery. “We had been told that even if she did survive, she would probably be deaf, blind, and in a permanent vegetative state,” Davis wrote.

[W]omen’s abortions are none of your business – not even those of a public figure, not even one who became an international figure because of abortion rights. We shouldn’t have to explain ourselves or justify our life decisions: our abortions are ours alone.

Research shows that talking with people about issues like abortion helps to lessen stigma around terminating a pregnancy. But why must women splay their most intimate moments out into the world in order for people to understand how basic and necessary abortion rights really are?

And Sarah Kliff reminds us that Davis, while her situation was more extreme than most, is far from unusual for having terminated pregnancies:

Talking about abortion is rare — but the actual experience isn’t. More than one in every five pregnancies — 21 percent, excluding miscarriages — are terminated, according to the Guttmacher Institute, a non-profit research organization that supports abortion rights. Each year, 1.7 percent of American women between 15 and 44 have an abortion.

Researchers at the Guttmacher Institute published separate research in the journal Obstetrics and Gynecology, estimating that if the abortion rate from 2008 held, 30 percent of American women would have obtained an abortion by time they turned 45. One in 12 women, at the 2008 rate, would have had an abortion by age 20, and a quarter of all women under 30 would have terminated a pregnancy.

Taking photos can worsen your memory of the things you see:

Two new studies published in Psychological Science found that people who took pictures of objects had more trouble remembering specific details about them, where they were situated, and even if they had seen them at all.

Fairfield University psychologist Linda Henkel had people take tours through the university’s Bellarmine Museum of Art. On the tour, the subjects were asked to take note of certain objects, either by photographing them, or simply by observing them. The next day participants had less accurate memories of the objects they photographed compared to the ones they had only observed. Henkel attributed this to something she called the “photo-taking impairment effect,” which is sort of like in The Phaedrus, where Plato warns that the written word kills our ability to memorize things, but with cameras instead of writing.

“When people rely on technology to remember for them—counting on the camera to record the event and thus not needing to attend to it fully themselves—it can have a negative impact on how well they remember their experiences,” Henkel said.